We're Listening To NPR: Meet The Hosts Of INVISIBILIA 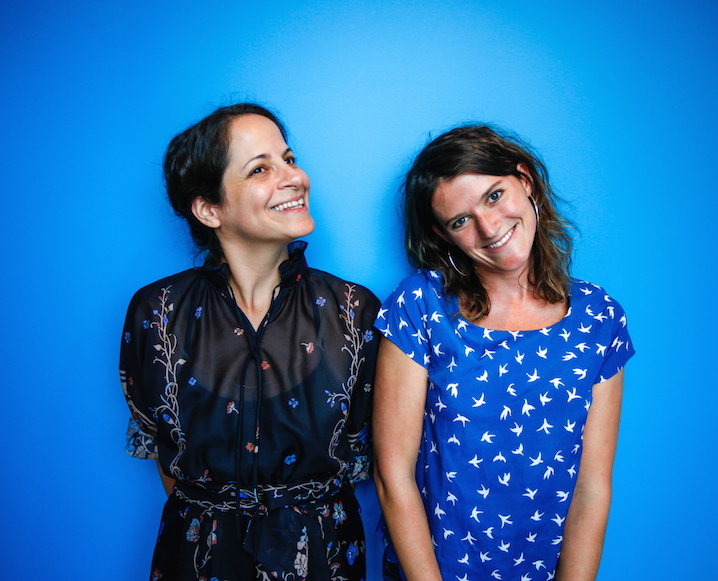 Invisibilia, Latin for “all things invisible,” is NPR’s newest obsession-worthy podcast about the invisible forces that control human behavior – ideas, beliefs, assumptions and emotions. Created and co-hosted by journalistic vets and experts Alix Spiegel and Lulu Miller, it poses the question: What would you do if you were not afraid? Not anxious? Not held back by your own thoughts?

Invisibilia doesn’t just deal with fear and anxiety – it exposes the immense power of the human spirit to overcome adversity, as only a show brought to you by the producers of the award-winning This Americn Life and Radiolab can do. Invisibilia gets deeply personal and staggeringly real, showcasing mental health from an entirely fresh perspective; and yet it’s infused with humor, personality, and feels like you’re in on the coolest conversation ever with a pair of your closest girlfriends.

From the man who is plagued by violent thoughts to the person literally trapped inside his own body, to woman who is physically incapable of feeling fear, these stories give fresh insight on how we’re wired and how we process thoughts, feelings, and emotions. After binge listening to every single Invisibilia podcast and sweeping our jaws off the floor, we sat down with Alix and Lulu to chat about Invisibilia, the forces that connect us all – and ultimately, what it means to be human.

The Chalkboard Mag: First off, our team is completely hooked on your show. Listening to Invisibilia is like listening to two friends simply having very open, very authentic conversations with others – yet at the same time it’s actually incredibly scientific and academic (thank you for making all that incredible information so accessible!). It’s funny, heart-opening, real, raw and totally relatable. Quite the feat. What was it that originally sparked you to create a show like this one?

Alix Spiegel: Thanks! Like so many stories in life, this one starts with a crush…. I had a crush on Lulu’s work and called her up to see if she would work with me.

Lulu Miller: Picture me on the other end, (I’m pretty sure I was in my pajamas— I was freelancing at the time), picking up the phone to hear one of my radio idols on the other end asking me if I’d like to do a story with her. And I was like… Yeah! Ok.

ALIX: So we did a story together – about this man plagued by involuntary violent thoughts who found a seemingly radical way out of them, which ended up being the main story in our first episode about dark thoughts. His story actually ties together an evolution I’ve witnessed in psychotherapy over my ten years reporting on the topic. And then the show concept actually grew out of that reporting

LULU: Right, we reported a few more pieces together before the real thread of Invisibilia came together. We realized we were both drawn to stories about the unseen forces that shape human behavior. It took us a while to come up with a name for the show, but for a long time we knew we were looking at ‘invisible forces.’ We approach the topic in slightly different ways: Alix has been covering mental health and human behavior for years, and on Invisibilia, she’s sort of the voice of cultural constructs and influence, whereas I tend to approach our work for this show with the lenses of biology and science.

TCM: We often think our lives would be so much better if we were free of anxiety or fear, but is this really true? Did you find that these feelings play an important role in our lives we might not realize?

LULU & ALIX: Biologically speaking, fear is a mechanism of survival. It wouldn’t be all sunshine and rainbows if you lived without it. You could get yourself into real trouble. However, for the hour, we were able to hear from somebody who has a very rare condition — she is biologically fearless — and yet she has been able to survive in the modern world. By now, she is middle-aged. She isn’t afraid of snakes or loud noises, she isn’t afraid of dangerous strangers approaching her in the night with a knife. She leads a very different (and more precarious) existence than the rest of us, and yet she has been able to survive. We spoke with a Caltech professor, Ralph Adolphs, who has studied this woman as well as fear in the human brain. He explained that using other tricks in the human tool belt — logic and reasoning — she has been able to protect herself. While she certainly comes face to face with more dangers than the rest of us typically do (because she does not have fear to guide her away from dangerous situations or places), she has the odd side effect of not being traumatized by experiences that the rest of us may have found frightening. We end that segment by noting that it seems like an odd bargain: If you have less fear, more bad things will likely happen to you, but you won’t necessarily experience them… as bad! So which would you choose? More fear or less fear? In the second part of the show we explore how much getting rid of your fear is actually a choice.

TCM: We love that while the people and cases you feature might seem extreme, there is actually so much to relate to in each instance. In each of these stories, was there a through-line you noticed amongst the people you featured – some sort of commonality (or commonalities) amongst them?

LULU & ALIX: Bravery. The people you meet on Invisibilia are people who are having extremely profound and different experiences – a man who has urges to murder his wife, a man who was so afraid of rejection that he literally couldn’t leave his house, etc. These experiences and feelings are often quite difficult to talk about with your therapist or doctor, much less the entire Internet- and radio-enabled world. But the people we met are actually eager to share these sensitive things in order to help other people who are in similar situations and feeling lost or alone. So the one thing I’d say these people have in common is they are all incredibly brave.

TCM: Anxiety, fear, and mental illness have quite the negative association in our culture, which just ends up creating this big loop of fear and negativity. This brings up an interesting point you touched upon in Episode 2: We often fear the things we simply don’t understand. What do you think is the biggest misconception people have about anxiety, fear, mental illness, etc?

ALIX: Gosh… I’m not sure what the biggest misconception is at all, but I will say I think that there is a big misconception around crime and how much we need to fear crime. I found out in the course of reporting on our fear show that crime rates are essentially as low as they were in the 1950’s – in fact the homicide rate is as low as it’s been in about 100 years. (I got that information from a Harvard criminologist who was the President of the American Society of Criminology.)

But I don’t think that’s the perception that most of us have. I think most of us live our lives shadowed by fear of crime in a million ways large and small. The point of the fear show was that our perceptions were out of whack with the reality – and it attempted to look at why that is, and whether there is anything we can do about it.

TCM: Most people have a pretty narrow view of what “treatment” for a mental condition looks like. You speak to neuroscientists, psychologists, behavioral therapists – it runs the gamut. Out of all the doctors and practitioners you spoke with, what were the most interesting/unique modes of therapy you found, ones our readers might not know even exist?

LULU: Well the most surprising treatment I think we came across was the treatment we talk about in the first show, where a therapist in LA named Tom Corboy has his patients who are struggling with OCD and harming obsessions hold a knife to his throat. That really shocked me – but if you look at it in a different way it makes sense. It’s really a form of exposure therapy – which is a standard therapy for OCD – the idea is to force someone to be exposed to exactly the thing they most fear. If a patient fears hurting someone, it makes sense to make that fearful person hold a knife to a therapists throat! At the end of the day, it’s still a wager for Dr. Corboy. How can he be sure that the patient he’s treating won’t act on their violent thoughts? He says that in 20 years, he’s never been wrong.

TCM: What was the most unexpected thing you learned from the show?

LULU: I interviewed a woman from India, and she mentioned that in the small Indian village where she grew up, there was no word for ‘bother.’ She actually asked me, “Why would you say that word?” When she came to the U.S., she realized everyone was always afraid of  ‘bothering’ each other – showing up unannounced on a neighbor’s doorstep, calling to talk on the phone, etc. I spend a large portion of my life being completely afraid of  ‘bothering’ people, so I understood what she was saying. I will look at a telephone and literally sweat… before dialing. Hearing her talk about her experience made me realize just how much my emotions and anxieties (such as concern over ‘bothering’) are, in fact, created by culture and society. I think this is how Alix sees the world all the time, and I’m just catching up.

TCM: There is such inspiration in each podcast – from people learning to decode their fears to literally awakening from a lifetime of misunderstanding. What was your favorite bit of wisdom or inspiration you gained from Invisibilia?

LULU: This is a big one for me. There is a foolproof antidote for fear. It’s not a drug or hypnosis. It is just a very simple equation that this IT guy in Canada, Jason Comely, discovered and told us about. It’s this:  fear = thinking + time Take either piece of that equation away – thinking or time – and you cannot get fear. I have actually actively used it in my life to great effect already and it works… every time.

TCM: If there is one message you’d like listeners to walk away with after listening to Invisibilia, what would that be?

LULU & ALIX: You’ve got one life. Don’t be afraid to live it.