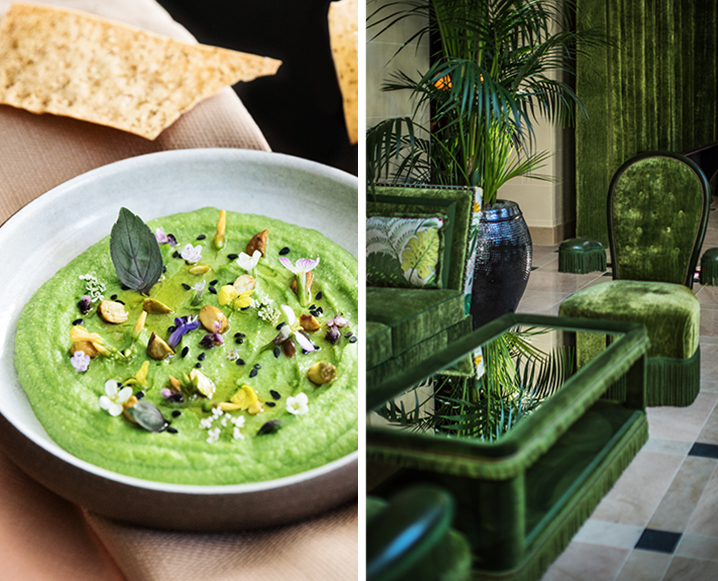 Originally built in the 1920s as the headquarters for The Bank of Italy, the new NoMad hotel in Downtown LA just screams old-school swank — or rather, pronounces it loudly with a martini in hand and a bowl of the most beautiful hummus you’ve ever seen in the other.

Even with soaring ceilings and a gilded lobby, The NoMad Los Angeles still manages to flex a distinct contemporary California design aesthetic – seasonal menus included. The NoMad menus capture the vibrancy of LA’s food and drink culture just fine. From innovative cocktails to locally-sourced ingredient-driven dishes like the stunning recipe below, the team behind NYC’s celebrated NoMad and Eleven Madison Park have nailed it again.

Grab a table in the lobby for an accessible yet elevated brunch, or make a reservation on the second floor in the Mezzanine for Left Coast-level fine dining with a distinct So Cal flavor. Can’t bear the traffic? Bring some of those delicious vibes home with this elegant protein-rich veggie dip recipe from The NoMad Los Angeles’ kitchen…

For the hummus:
Yields around 4 cups

Using a clean towel, wring out as much water as possible from the fava beans. Process the beans and garlic in a food processor and slowly emulsify in EVOO and lemon oil until smooth. Remove from the food processor and in a bowl over ice, fold in the garlic, whipped ricotta and spinach puree. Season to taste with salt and tahini.

For the spinach puree:
Yields 2 cups

Using a clean towel, wring out as much water as possible from the spinach and fava beans. Combine all ingredients in a blender and blend until smooth, adding additional ice as needed to facilitate blending.

For the lemon oil:

Using a microplane, zest all lemons, being careful not to zest any of the pith. Combine zest and oil in a pot and simmer on the stove on low heat for 1 hour. Let sit at room temp and strain when cooled.

For the pickled shallots:

For the white balsamic pickling liquid:

Combine ingredients in a pot and bring to simmer. Chill.

Spoon the hummus into a coupe bowl, making sure to create several small swirls in order to hold the olive oil. Place olive oil in the swirl dips, and garnish around the center with the flowers and herbs. In a smaller, separate bowl, plate the lavash standing up.

Discover other healthy haunts around town with our ‘LA Bite of the Month’ series.