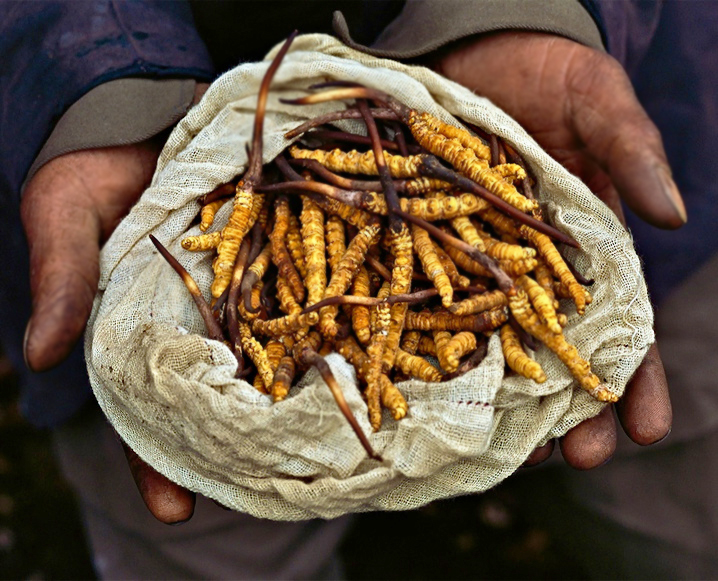 What you need to know: Are you familiar with science fiction films? This superfood could star in a leading role. Cordyceps mushrooms, also known as the caterpillar fungus, are a renowned supertonic – building sexual and physical power, mental energy, the immune system – all while prolonging life. They hold a place as one of my personal favorites in herbalism. However, cordyceps are also parasitic organisms that consume the body of a particular kind of caterpillar in mountainous regions of China, Mongolia and Tibet. As bizarre as they are outrageously beneficial for your health, these fungi are an extremely effective and powerful life-enhancing agent, ranking right up there with ginseng, reishi and deer antler as one of the most prized substances in tonic herbalism.

Why you should try it: Although the thought of consuming such a peculiar food might creep you out, I encourage you to give it a try. These mushrooms have profound health benefits. Used to strengthen the body and mind at a fundamental level, they are able to increase the “primary motive force for life activities,” also known as your jing, which helps the body to adapt to stress and resist the process of aging, which is something we all can benefit from.

In Traditional Chinese Medicine, cordyceps are widely used for the purposes of strengthening the primal kidney functions, which include brain power, skeletal structural integrity and the harnessing of your power and motivation. As a sexual tonic, cordyceps are considered to be one of the best – one reason why they are so popular among the male gender. Cordyceps are also considered in Asia to be a powerful athletic tonic, greatly improving performance and muscle building capabilities. Is there anything this little mushroom cannot do?

Let’s get together: If you’re now thoroughly convinced that cordyceps should become a daily addition to your health regime, then let’s talk about how you’re going to consume it. There are two ways; one for the brave and one for the more faint of heart. If you are fearless and looking for a culinary adventure, then you are going to want to try Cordyceps Munchables by Dragon Herbs. Dried and packed into a bag, they can be eaten as a crunchy snack or soaked in hot water to be sipped as a tonic. For the rest of us, there is a supplement form, which comes in many herbal blends like this Adaptogen Energizer