Paris My Sweet: City of Light and Dark Chocolate 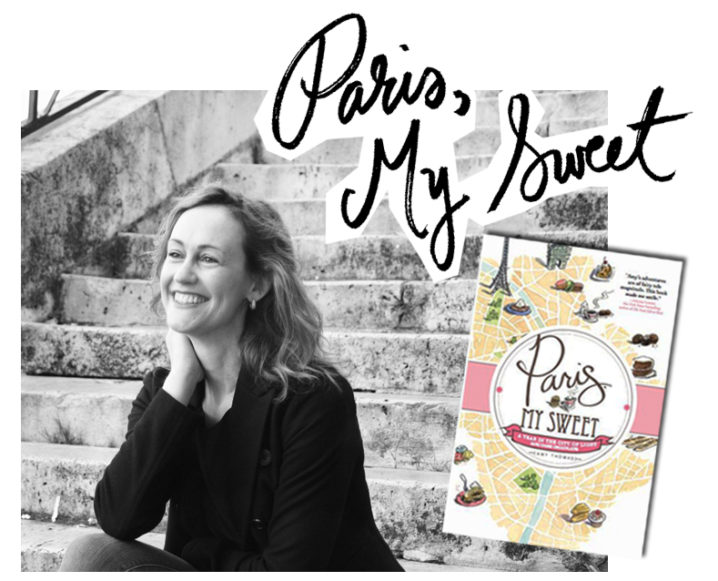 Upon finishing the delectable Paris, My Sweet: A Year in the City of Light (and Dark Chocolate), I was propelled toward two activities: visiting my local bakery for an almond croissant and then contacting author Amy Thomas to ask a ton of questions! Happily, she obliged.

Amy spent two years living the dream in Paris, working for Louis Vuitton on the Champs-Élysées. While there, she took it upon herself to explore the best patisseries and boulangeries in the city – quite an arduous task, I’m sure – and then write a book about it.

Paris, My Sweet is out this month and to celebrate, we’re doing a book giveaway to one lucky reader! Find entry details at the end of the article.

Though I don’t recommend reading this tribute to deliciousness during a 21-day-juice cleanse – you’d surely lose the will to go on – it’s the perfect book any other time you find yourself in need of geographic or baked escapism. The occasional culinary indulgence has a place in even the most health-conscious person’s life. At least it does in mine!

TCM: Have you always had a sweet tooth or did that begin in NYC?
AT: As far back as I can remember, I’ve had a sweet tooth. Growing up, we always had Nabisco cookies, Entenmann’s pastries, Duncan Hines brownies and cakes. It was all processed food, but it was sugary and seductive, and I was smitten. Fortunately, as I’ve gotten older and become more aware of ingredients’ origins and artisanal options, the quality of my sweets has gotten much better (and more delicious).

TCM: When did your obsession with Paris begin?
AT: My junior year of college. I was sort of bored at school, so I decided to spend a semester abroad. It was just a process of elimination that made me decide on Paris, but now I can’t imagine having gone anywhere else. The five months I spent there were life-changing. Not only did I fall in love with the beautiful City of Light, more importantly, I realized there’s a whole big world out there to see and experience. Thus, I became obsessed with Paris, as well as with traveling.

TCM: What dessert best represents your time in Paris?
AT: That’s a good question! There are a gazillion delicious options that run through my mind, but if I had to pick one, I’d probably say a pain aux raisins. It’s not a dessert, per se, but a breakfast pastry – one that I’d never cared for or even had much exposure to in the States. But I lived near an historic bakery called Stohrer and tried the pain aux raisins one morning after they’d just been pulled from the oven.  It was revelatory: rings of pastry dough, piped full of sweet crème patissière and plump raisins.

I don’t think I ever would have tried one if I hadn’t been in Paris.

What were the differences you noticed between how Americans and the French approach food and eating?

“It was a wonderful and enlightening experience living in a culture that appreciates food so much. For one, the French don’t scarf down food while walking down the street, driving their cars or sitting at their desks the way we often do in America. They take food and mealtimes more seriously, and they also take more pleasure from the ritual of shopping for, preparing and eating meals. I also found the quality of the food to be better in France. It’s typically fresher and more seasonal, less processed. Unfortunately, a lot of that is changing. Meals are becoming more casual, more food is imported, Parisians are eating more on the go and, in fact, I think the French are the second largest consumers of McDonald’s outside the US!

TCM: Tell us some of the differences you noticed between the two cultures and their approaches to work-life balance.
AT: The cultural differences in Paris were very much aligned with the differences I observed in terms of food and eating. The French are very traditional; they have rules and rituals that are important to them. So leaving the office to go out to a café or restaurant for lunch, for example, was a more common occurrence in Paris than in New York. Conversely, I think the French enjoy cooking more and have large family dinners together. The French seem to leave their jobs at the office more, too, which is nice – they’re not so plugged in 24/7 and Sundays are especially sacred. The French don’t subscribe to guilt the way we Americans do.

TCM: You talk a lot about straddling two worlds and the dualities between Paris and New York, choosing between pleasure or success, beauty or energy. Have you found a balance – a sweet spot – between both?
AT: I wish I could say that I am calmer, more ritualistic and more stylish as a result of having lived in Paris for two years! But the reality is, it’s hard not to get swept up in New York’s go-go-go lifestyle. Every once in a great while, I sit in a coffee shop with a book the way I did in Parisian cafes, or I enjoy a long, leisurely dinner, complete with three courses and a bottle of wine. But the sad fact is, life in New York is fast, unforgiving and, well, I’m realizing I have to make a bigger effort to be healthier, both physically and emotionally.

TCM: Clearly, flour, sugar and butter make up a large part of your diet based on your writing. How often are you really eating macarons, croissant, pain au chocolate, chocolate chip cookies, etc.?
AT: I go through phases. I’ve recently been very “bad,” what with Valentine’s Day chocolates, the launch of the book and all the celebrations and yummy gifts that’s entailed and traveling – which is when I really love to sample and indulge in different things… yeah, I’ve been on a tear. So basically what happens is I hit a wall. I can see it in my face and feel it in my body that I need to stop so I’ll be go an uber healthy kick, very consciously eating more veggies and abstaining from sugar and sweets. Of course I always feel better physically when I’m eating well, but I just really love sweets. In order to keep everything in balance, I’d say my general rule of thumb is to indulge one day during the week and one day on the weekend.

TCM: Your blog features Vegan Mondays. What prompted that? Is it a challenge?
AT: I stopped eating red meat for environmental reasons 12 years ago. But while I was in Paris, I became aware of Britain’s Meatless Mondays. I figured I would just modify it according to my own lifestyle and rules. (One of my favorite mantras is “You can’t change the world, you can only change yourself.”) So, while not eating any meat or dairy products one day a week is hardly revolutionary, it’s one small thing I can do, and it’s something that is important and personally meaningful to me.

TCM: Let’s say I had a day in New York City/Paris and could only visit three sweet spots. What would be your top three places to hit up?
AT: In New York, it would be City Bakery for its peanut butter cookies and hot chocolate, Levain Bakery for its killer six-ounce cookies and Butter Lane or Chikalicious for their sublime cupcakes. In Paris, Jean-Paul Hévin’s chocolates are a must, Pierre Hermé for his macarons and cakes and I can’t leave Paris without one Nutella crepe from any of the vendors in the street.

One lucky TCM reader will win a copy of Amy’s book Paris, My Sweet!  In the comments below share your favorite spot in the city for baked goodies – New York, Paris or otherwise!

Read more from Amy on her blog and purchase Paris, My Sweet on Amazon here.