Poetry + Tamales: a Collaboration from Out of the Box Collective + the Fowler Museum 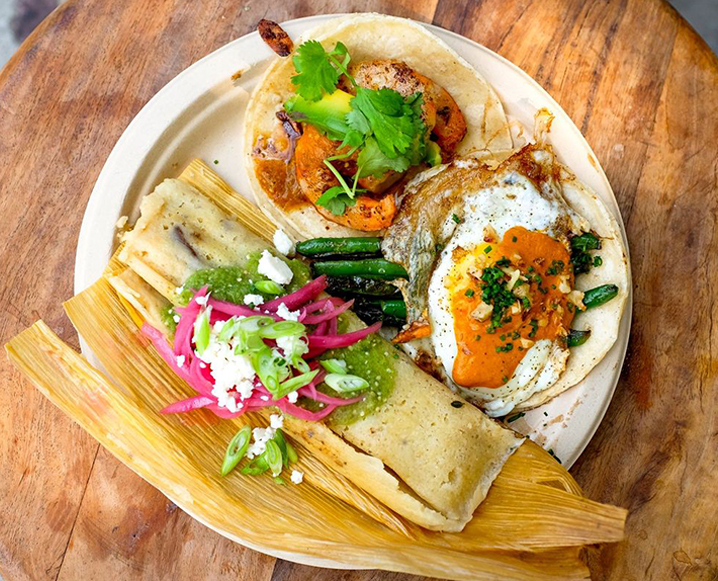 Inspiration can strike in many forms, whether it’s sparked by art, food, nature, a smell or memory; with the help of Out of the Box Collective, this month it comes in the form of delicious tamales, inspired by the creative mind and work of Jose Montoya, and the Fowler Museum exhibition showcasing his art. Read on to learn more and how make this inspired tamale recipe.

Food is culture, and that’s why we are so excited about our upcoming Out of the Box collaboration with the Fowler Museum at UCLA. To celebrate their exhibition featuring Chicano artist, poet, and activist José Montoya (1932-2013), and to bring attention to the Museum’s crowdfunding campaign this month, Out of the Box Collective has created the Chicano Box, filled with local ingredients and recipes inspired by LA’s favorite Chicano dishes.

If you’ve always wondered how to cook tamales, here’s your chance! We have recipes and ingredients from Wes Avila of Guerrilla Tacos to cook Butternut Squash Tamales and Sweet Potato Tortillas. From Gilberto Cetina of Chichen Itza Restaurant, we have ingredients and a recipe for Ceviche. From Carlos Salgado of Taco Maria, we have a recipe for Salsa Negra to cook with chicken. And last but not least, we have a Carne Asada recipe from Roy Choy, just to put a multi-cultural spin on things. To order your OTB Real Food “Chicano” Box, register here, and select the Real Food Box for a November 30th delivery (order deadline: November 24th).

Having grown up in the San Joaquin Valley as a field hand, Montoya experienced the harsh living conditions so many migrant farm workers endured. Life on the fields informed his activism, his poetry, and his art. Montoya worked tirelessly in support of Cesar Chavez’s United Farm Workers movement to ensure fair labor standards. How better to honor Montoya and his efforts than with a box of locally and sustainably grown food celebrating Chicano culture?

To support the crowdfunding campaign for Montoya’s exhibition, please consider a $25 donation to the Fowler Museum crowdfunding campaign, and become eligible for a 15% discount on your first OTB produce box, among other perks. Make a $2,500 donation and receive a free OTB Real Food “Chicano” Box, and much more.

For the filling:
1 lb of butternut squash, steamed
1/2 lb. of Monterey Jack Cheese

Purchase masa preparada and corn husks from a Latino market (or order a Real Food Box from OTB for Nov. 30th and let us do the sourcing for you!) Soak dry husks in hot water in sink for about 45 minutes or until soft. Rinse well.

Next, wash and peel the tomatillos. Cut tomatoes in half.

Melt the lard in a separate sauce pan over medium heat. Deseed the chilis and add them to the pan with the bay leaves and garlic. Lightly roast for 2-3 minutes. Add the sesame seeds, pumpkin seeds, allspice, and cloves, and toast for 3 more minutes. Add water to the pan (approximately 1/4 cup), the tomatillos, and tomatoes. Add a pinch of salt to help it break down and let it simmer for 10 minutes.

Next, remove sauce ingredients from heat and carefully pour into a blender. Make sure to get everything in there (including the bay leaves). Blend until smooth and set aside.

Assemble the tamales: Drain the water out of the corn husk and pat dry. Add about a tablespoon and a half of masa to the husk. (I use a small spatula to smear the paste evenly across the husk). If the smear is too thin, it will taste like a dried out tortilla chip. Too much, turns it into pasty.

Add the filling and top with some sauce. Then fold once, give it a little pinch, and fold the other side like a glue. Squeeze towards the tip and fold over. Or tear some strips of corn husk and use them as ties for your corn husk parcels.

Steam the tamales in a steamer. Stack them together (but not too tightly) so that the open part of the tamale is sitting upright in the pan. Steam for around 30-45 minutes on the stovetop. Serve with sauce and enjoy!