This Middle Eastern Breakfast is Uber Cozy + Packed With Protein 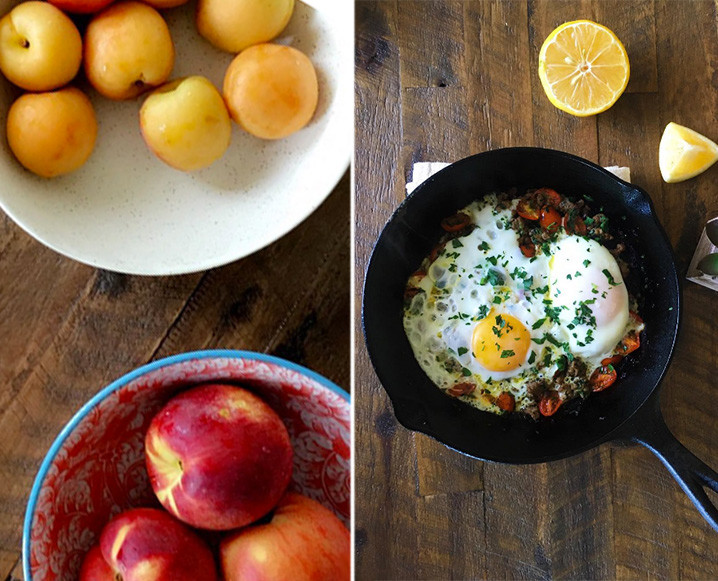 Add a little lemon and a whole bunch of spice. We love how Middle Eastern food turns up the flavor-factor by using ingredients that add nutrition — like citrus and herbs — rather than less healthy amplifiers like sugar, salt and cream. We also love how deep these recipes’ roots go, and how homey even the simplest dishes can feel.

The latest box from farm-to-doorstep delivery service, Out of the Box Collective, is an ode to the origins of Middle Eastern cuisine. The box is created in partnership with writer Sara Leana Ahmad, whose Little Lemon blog was recently nominated as a finalist of Saveur’s “Best New Voice of 2017” award. Get a gorgeous Middle Eastern breakfast recipe (pictured above!) and order your own box below…

Dating back to 1750 BC and inscribed in Akkadian, an ancient Babylonian language, two clay tablets known as the “Yale culinary tablets” contain the oldest known recipes. After years of misinterpretation and an erroneous conclusion that the tablets contained pharmaceutical information, the script was finally deciphered by French scholar Jean Bottero. He described the cuisine, which included recipes for various stews, breads and sweet cakes as “a cuisine of striking richness, refinement, sophistication and artistry, which is surprising from such an early period. Previously we would not have dared to think a cuisine 4,000 years old was so advanced.”

We have been enjoying the culinary treasures of modern day Mesopotamia for centuries. From our Arab Spring Box to our Persian Chicken Rice to our Turkish Shakshuka, at Out of the Box Collective we sometimes cross modern Middle Eastern dishes with traditional Mesopotamian flavors discovered thousands of years ago. It’s part of our culinary inspirations story of seamlessly connecting people and places around the dinner table, throughout time, as we deliver the freshest ingredients to replicate outstanding dishes from so long ago.

Food is a powerful cultural narrative, and writer Sara Leana Ahmad, an Iraqi American living in Los Angeles, hopes to reframe the Orientalist narrative of Iraq through food, our common humanity, one kubba at a time. In her blog, Add A Little Lemon, she writes about her childhood in Iraq, recalling the quintessential Middle Eastern breakfast that her father would make -– a skillet of ground beef with onions, parsley, and tomatoes -– along with one very special instruction: Add a Little Lemon.

What's In The Box:

In a large skillet, heat about a tablespoon of olive oil at medium. Sweat the onions about 3-5 minutes. Add salt.

Add the ground beef. Be sure to break it apart as you stir so that the meat cooks in small pieces, like pebbles. Cook until browned at medium/low heat, about 5-8 minutes. Once the meat is cooked, at the parsley and lemon juice. Mix together well, then add the tomatoes, and stir. Add salt and pepper to taste. Keep on medium heat about 3-5 minutes.

Bring the heat up to medium/high, add the eggs on top of the mixture in individual spots. Top with some salt, preferably a nice flaky salt like Maldon sea salt. Immediately cover the skillet and reduce heat to medium/low. This shouldn’t take more than 5-10 minutes, depending on the density of your skillet. Keep checking, so that the whites are cooked but the yolks are still soft.

Once done, remove the cover. Top with parsley! Serve with samoon, khubz tanour, pita, or baguette! And if you’re like me, a little labneh, too!