Over Your Oatmeal? Make These Gluten-Free Zucchini Muffins For Breakfast 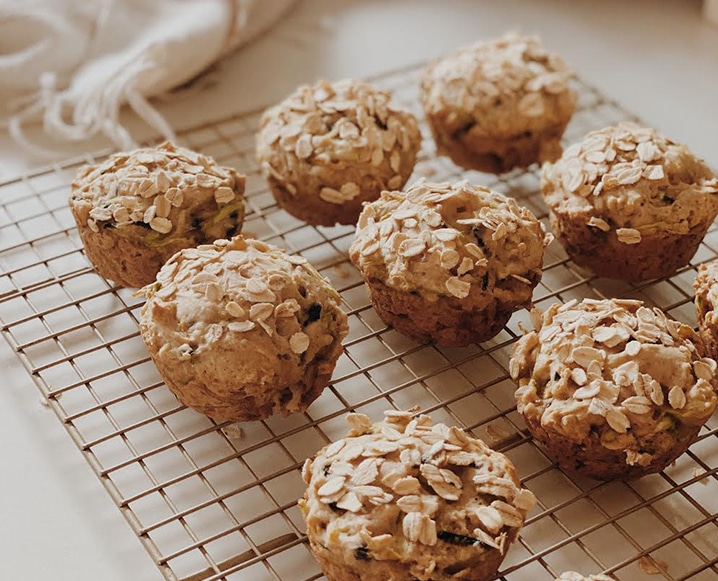 Our ideal A.M. meal puts the fast in breakfast. We want something nourishing that only takes a few seconds to go from plate to belly — and these gluten-free zucchini muffins do the trick every time.

Loaded with fiber that keeps us full, and free of refined sugar and dairy, these zucchini muffins from foodie and restauranteur, Hayley Feldman, co-owner of Venice’s Chex Tex, give us the perfect boost of energy without a crash. We love making a batch when we have a little evening downtime and enjoying them in the morning – or any time we need to munch on something satisfying yet clean.

Not sure a solo muffin is enough for you in the morning? Try eating these with a dollop of raw nut butter (almond or sunflower are our go-to’s) and a side of berries…

Heat oven to 350°F. Prepare a 12-cup muffin pan by either greasing it with a little coconut oil or lining the cups with paper liners. Set aside.

In a large mixing bowl, whisk together flour, baking powder, baking soda, cinnamon and salt until combined. Set aside.

In a separate mixing bowl, whisk together egg, maple syrup, milk, coconut oil and vanilla extract until combined. Pour this mixture into the dry ingredient mixture, and stir with a spoon until just combined. (Do not over mix.) Stir in the zucchini, carrot and oats until just combined.

Spoon the batter evenly between the 12 baking cups. Sprinkle extra oats on top of each. Bake for approx. 20 minutes (see tip below). Transfer the pan to a cooling rack, and serve muffins warm.

Baking tips:
+ Make sure the egg, maple syrup and milk are at room temperature to prevent separation.

+ Measure the coconut oil after you melt it (so it’s more exact), and then let it come to room temperature before mixing.

+ Either squeeze or dry the zucchini and carrot on paper towels to remove as much moisture as possible before mixing.

+ Each oven is different, so you may need more or less than 20 minutes baking time, but these muffins are very forgiving. Take one out, cut it in half and see if it’s cooked all the way through. If not, pop them back in the oven for a few minutes longer.

Grab another genius recipe from Hayley here! Hint: it’ll make you forget all about your avocado toast obsession…