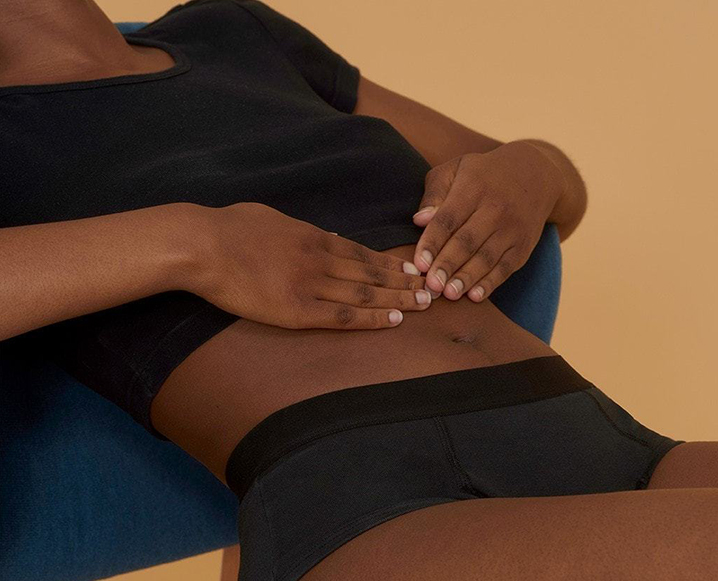 We know, we know — is there anything CBD can’t do? Although it’s hard to believe that CBD can have as many health benefits as the quickly growing industry claims, the truth is that, like turmeric, plants with major anti-inflammatory benefits can solve a whole slew of health issues. Foria, the brand harnessing the healing power of cannabinoids to address many intimate areas of well-being (see our story on CBD and libido here) shared the below on CBD and endometriosis and we knew we had to share.

To their delight, many of Foria’s clients are reporting improvements related to the common, but highly misunderstood condition. Endometriosis is a painful condition experienced by millions of women, yet there isn’t a clear understanding of what causes it or how to mitigate the disruptive symptoms. Specifically, endometriosis causes tissue to grow outside the uterus which can lead to menstrual irregularities and excruciating pain.

According to the pros at Foria, science is beginning to show how CBD can not only help ease endometriosis pain but also balance the root causes of key symptoms naturally.

For a condition that currently has no cure, and if often treated with prescription pain meds and dangerous surgery, this is exciting news. Discover the fascinating findings below and pass it on to a friend in need…

Cannabis + EndometriosisThough many folks are already familiar with the pain-relieving effects of CBD and THC, scientists have uncovered numerous ways that cannabis and hemp extracts could actually target the root causes of various conditions — including endometriosis. Research indicates that cannabinoids could treat endometriosis by:

But which cannabinoids have which effects? And should you be using THC only? CBD only? Or some combination? Whether you’re already using cannabinoids for your endometriosis, or you’re considering an experiment with them, we highly recommend reading on to learn about the effects of THC and CBD on endometriosis.

If you’ve been diagnosed with endometriosis, then you’re probably already aware that there’s currently no cure. The treatments offered by doctors — including painkillers, hormone therapy, and risky surgical procedures — are aimed at merely holding the endometriosis in check. And they are often ineffective at that.This is why many women are seeking holistic approaches to deal with their recurrent symptoms – through diet and other lifestyle changes – and incorporating cannabinoids (like CBD and THC) into their treatment routine.

Let’s start with a bit of background first. Endometriosis is a frequently painful condition where the tissue that normally lines the uterus – the endometrium – mistakenly grows outside of the uterus. Endometrial tissue can develop on the ovaries, fallopian tubes and other abdominal locations. Although there is nothing intrinsically life-threatening about this tissue, it unfortunately responds to the hormones circulating in your body the same way it does in your uterus: Every month the endometrium builds up, then breaks down and sheds.

Unlike typical menstruation, the blood and tissue shed from these misplaced cells are frequently trapped in your body. This cyclical pattern can become excruciating — triggering inflammation and scarring as your body struggles to reabsorb the dead material.

For the 5-10% of women who suffer from endometriosis, life is significantly more challenging: As a group, their quality of life goes down while anxiety and depression rates increase. Most women endure the pain of endometriosis for years before being properly diagnosed — and it can be devastating to continue to get worse even while following prescribed treatments.

Women with endometriosis typically suffer from at least one of the following symptoms:

How is Endometriosis Treated?

There is no known cure for endometriosis. Treatment focuses on symptom management while trying to prevent the endometriosis from spreading. Doctors typically suggest one or more of the following three treatment options:

Painkillers. The most widely-prescribed resource for dealing with endometriosis is an effective painkiller. Anti-inflammatory drugs (NSAIDs) and analgesic painkillers help women cope with the painful symptoms of endometriosis, but do nothing to prevent the disease from progressing. Sometimes more extreme painkillers are prescribed, with debilitating systemic effects (as one Foria client with endometriosis discovered before switching to cannabis therapy).

Hormones. Another popular prescription is for hormone therapy, which is thought to alleviate symptoms by reducing the strength and/or quantity of menstrual cycles. However, some women respond poorly to hormone therapy.

Surgery. Doctors can surgically remove the misplaced endometrial tissue, which often provides tremendous relief… for a while. Unfortunately, there is a high risk of complications, and approximately half of women will have their symptoms return within one year, requiring further treatment. Another surgical option is an ovariectomy — both surgical and natural menopause will end the cyclical nature of endometrial torture. Unfortunately, pain from permanent endometriosis scar damage could persist beyond menopause, requiring lifelong pain management.

How Can Cannabis Help Endometriosis?

Women across the world use cannabis and hemp extracts to treat endometriosis, menstrual cramps and other gynecological complications — and they’ve been using them for millennia. In the last few decades, THC and CBD have been shown to be effective therapies with relatively few side effects. One reason scientists are enthusiastic about these compounds is the recent discovery that the body’s natural endocannabinoid system is integral to the healthy functioning of the female reproductive tract.

In fact, imbalances in these neurotransmitters are often linked to reproductive complications and diseases — including endometriosis — and it seems that careful use of phytocannabinoid supplements, topicals, and suppositories could make a huge difference in the underlying imbalance. How?

Cannabinoids Stop Cell Multiplication. Normally, your body has tools to prevent the growth of aberrant cells and to destroy them (apoptosis) before they become a problem. Unfortunately, apoptosis seems to be impaired in people who suffer from endometriosis and similar disorders. The endocannabinoid system is involved in apoptosis and stopping cell growth. Perhaps the most famous application of these effects is in cancer treatments. When certain cannabinoid receptors are activated (either by the body’s endocannabinoids or by plant-sourced THC), they can prevent cancer cells from multiplying. Similar research has shown that activating these receptors inhibits endometriotic tissue from proliferating in mice.

CBD Prevents Cell Migration. A frustrating problem for women who surgically remove their endometriotic lesions is that the endometriosis frequently comes back. However, scientists recently discovered that endocannabinoids are involved in regulating cell-migration. It turns out that molecules like CBD can stop endometriotic cells from migrating (by blocking the activation of the GPR18 receptor). However, molecules like THC that activate this receptor could potentially increase cell migration. This suggests that women who self-medicate with THC should consider counterbalancing its effects with CBD.

Starving the Bloodsuckers. In order for anything to grow, it needs a supply of nutrients. Likewise, endometriotic lesions can only proliferate if they develop a network of blood vessels (vascularization) in order to receive the required nutrients. Although research on the influence of cannabinoids on endometriotic vascularization is limited, multiple studies have shown that both THC and CBD can inhibit vascularization of cancerous lesions.

CBD vs Painful Nerves. Some women suffer from deep-infiltrating endometriosis — a more painful form of endometriosis that embeds deeper into abdominal tissue. One reason these lesions might be more painful is that they contain a much higher density of nerves than other lesions. Endocannabinoids regulate nerve growth, and their receptors (CB1) are expressed on the nerves that innervate endometriotic lesions. Molecules like CBD interfere with innervation by preventing activation of this receptor. However, this might suggest that using THC without the counterbalancing effects of CBD could result in a long-term increase in endometriosis innervation.

Like Advil Without the Side-Effects. NSAIDs like Advil are one of the most frequently-prescribed treatments for endometriosis. NSAIDs work by inhibiting certain enzymes (named COX-2) that contribute to inflammation. Unfortunately, NSAIDs thin your blood and can have gastrointestinal side effects because they also inhibit other enzymes (such as COX-1). It turns out that CBD’s anti-inflammatory effects come with fewer of these side-effects because it specifically inhibits COX-2 but not COX-1.

Cannabinoids Calm An Overactive Immune System. A large number of your body’s endocannabinoid receptors (CB2) are located on your immune system’s killer cells (macrophages). When these receptors are activated, they prevent macrophages from releasing inflammatory proteins (cytokines). People who suffer from endometriosis become hypersensitized to inflammatory toxins and signals. Fortunately, THC activates CB2 receptors, which is a large contributor to THC’s anti-inflammatory properties. This is useful for out of control inflammation caused by an overactive immune system — though depressing the immune system isn’t always desirable.

CBD + THC vs Pain Signals. Nerves that innervate endometriotic lesions can increase the pain of endometriosis. These nerves also contain endocannabinoid receptors (CB1), and when THC activates this receptor it can help decrease pain. CBD also helps relieve feelings of pain, but through other targets. Most notably, CBD is capable of desensitizing the pain receptor TRPV1.