We Did 50 Burpees Daily For 30 Days, Here's How We Survived 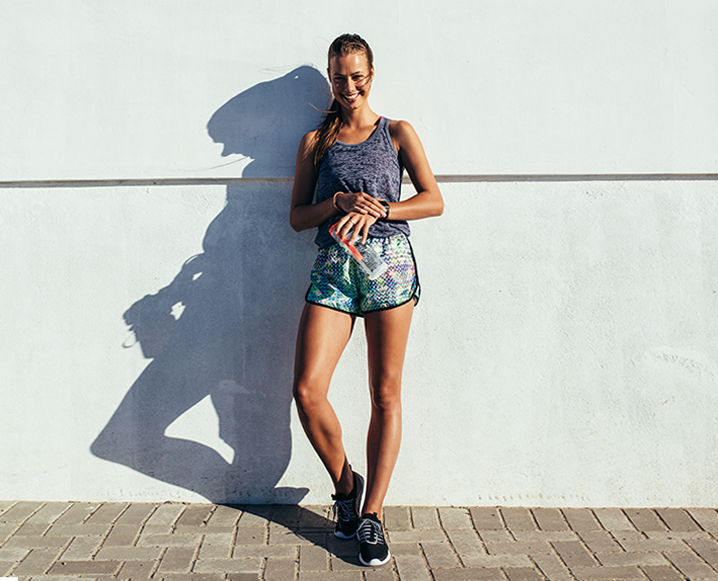 We swear, Some days we get sore from looking at our gym bags. That said, we always love the idea of these short term fitness challenges. PopSugar Fitness‘ Anna Quinlan challenged herself to 50 burpees a day for 30 days — and she’s sharing all about it below.

Discover how to master the most efficient full-body move we can think of, and everything you need to know about taking on this ultra-gratifying fitness mission…

Like all good fitness challenges, it started with an Instagram post. My friend Julie, a bona fide badass and stand-up paddleboard champion, declared she was going to attempt 50 burpees every day for 30 days, inspired by a runner who noticed a huge improvement in her overall fitness after completing a similar challenge. “Who’s in it with me?” Julie asked in her post, and I knew I was screwed. I tagged my running partner in the comments and volunteered her to join the challenge as well because that’s the kind of friend I am. We’d start the next day (theoretically). At the risk of ruining the suspense, I’ll give away the ending: we did it. We did 50 burpees a day for 30 days and even recruited some other suckers to join us as well. Here are the key takeaways:

Starting is the hardest part. Burpees aren’t easy. Doing 50 burpees at once is hard AF, and I’m not even going to lie about it. Throughout my 30-day challenge, however, I probably spent more time agonizing over getting them done than I did actually doing them. There was always an available excuse for procrastinating: too hot, too tired, too sore, too busy, too hungry, too full, too good a hair day to get sweaty. Once I got that first set of 10 done on any given day, though, I knew I was in the clear — just a few minutes away from having one more day of momentum behind me. I learned to get started on my daily dose of burpees the second I thought about it. Don’t pass go, don’t collect $200, don’t run through the list of excuses or promise that I’ll do them later — just pull my hair back and hit the deck.

Momentum is everything. I’m not talking about the physical momentum of doing a burpee — I’m talking about the metaphorical momentum of doing something every day. That whole “we’ll start tomorrow” thing? It took us three days after committing to the challenge to actually start. But once we had the first day under our belts, it got a little easier every day. I went 11 days in a row and felt kind of unstoppable . . . until I went camping, that is. After a seven-hour drive, I decided to skip a day. Over the course of the following seven days, I only did my 50 burpees once, even after I was back home with air conditioning and an indoor shower. Breaking my 11-day momentum had way more power than I anticipated. The good news? I started back up again and found my momentum. I tacked six extra days onto the end of my challenge and moved on.

Burpees might be the most efficient exercise on earth. I’ve run two marathons, I’ve finished a handful of triathlons, and I teach Megaformer classes twice a week. Until this challenge, however, every time I’ve done burpees has generally been part of a HIIT class. Isolating burpees as their own workout highlighted how they target every muscle in my body and get my heart rate through the roof. My entire body was sore for the entire first week. I worked up a genuine sweat every single time, even on day 30. The next time I’m traveling somewhere without great gym access or just need to cram a good workout into a short amount of time, my go-to move is definitely going to be burpees. Lots of them.

OMG, my arms. MY ARMS, you guys. So sore. I did a push-up at the bottom of every burpee, and it turns out that 50 push-ups is a lot on its own, much less combined with the other elements of a burpee. During the first couple of days, my arms were sorer than they’ve been in a while (I really hope my boot-camp trainers aren’t reading this right now), and that soreness lasted into the second week. Ouch. The flip side? My arms looked significantly more toned on day 30 than they did one day one. The above photo is from about day 20 of the challenge, and I almost accused the photographer of photoshopping someone else’s arms onto my body when I saw it. I tend to put on muscle somewhat easily, but even I was surprised by the end of the challenge. If you’re specifically looking to increase muscle tone in your arms, though, you might want to consider burpees (on burpees on burpees).

Maintaining good form helps. I’m not claiming my burpee is picture-perfect, but 1,500 reps later, I learned two tricks that made perfect form slightly more accessible. The first is to avoid locking out the elbows when you shoot back into plank position, but instead to keep the arms fully engaged so you’re already halfway down into your push-up by the time your toes hit the ground behind you. The second is to be really intentional about engaging the abs during the squat-thrust component of the movement (jumping the feet from plank position up to to meet the hands), which not only protects the lower back but makes the entire movement more powerful and controlled. Remember how I said my abs and arms were sore for a full week? These “tricks” are likely to thank for that.

It takes less time than you think. Fifty sounds like a big number. Most people’s initial reaction upon hearing that I was doing 50 burpees a day was something along the lines of, “That’s so many! I could never do that!” I didn’t time myself every day, but of the times I did set a stopwatch, I don’t think it ever took me longer than eight minutes. I think the fastest set was about five-and-a-half minutes. I always broke it down into five sets of 10, taking as much or as little rest between each set as I needed (usually less than a minute). Once I realized that even on my slowest, most unmotivated days I could get it done in less than 10 minutes, it felt easier. “It will be over in eight minutes” was often the pep talk I gave myself when I debated procrastinating. Considering the fitness benefits (see numbers two and three), eight-or-fewer minutes per day actually seems like a bargain.

Accountability helps. My friend Julie roped me into the challenge, I roped my running partner in, and between all of us, we got a few more friends to join in. Several of us posted daily time-lapse videos in our Instagram stories of our burpees, and more than once, I was tempted to skip a day but knew I’d have hell to pay the next time I opened my DM inbox. I leveraged IRL accountability to my advantage as well, scheduling “burpee dates” after yoga class or a short run, letting my workout partner for the day know I’d be doing 50 burpees after our workout (and usually convincing them to do some or all of the burpees with me).

Doing 50 burpees every day for 30 days was both harder and easier than I expected — I was truly surprised at how quickly I could get it done every day and what an efficient full-body workout it was. I was also surprised at how much the challenge got in my head — how much time I spent dreading it, how I beat myself up for falling behind, and how the mental workout of learning to just get it done was probably just as valuable as the physical workout of knocking out 1,500 burpees in a month. That’s the thing I love about challenges like this: you never know what the takeaway will be. This time it was shredded arms and a renewed appreciation for the sacrament of starting. I’m not sure what the next challenge will be or what the takeaway will be that time, but I have a feeling there are more of these challenges in my future. Who’s in?

How To Do A Burpee (The Right Way)

Stand with your feet shoulder-width apart, weight in your heels, and your arms at your sides Push your hips back, bend your knees, and lower your body into a squat.

Place your hands on the floor directly in front of, and just inside, your feet. Shift your weight onto them. Jump your feet back to softly land on the balls of your feet in a plank position. Your body should form a straight line from your head to heels. Be careful not to let your back sag or you butt stick up in the air, as both can keep you from effectively working your core.

Jump your feet back so that they land just outside of your hands. Reach your arms over head and explosively jump up into the air. Land and immediately lower back into a squat for your next rep.